This year was considered for being precocious for its very hot spring with up to 3 weeks in advance. Freshness of summer postponed the date of crop, which finally  was only week precocious .

This vintage 2011 still shows an unfamiliar climate. Here and there, all around the méditérranéen , winter was cold and humid, but short.

Advanced spring with a hot wave at the beginning of April, dryer and hotter than usual (which would have brought grape harvests in mid-august !). Very hot temperature towards mid-May with varying from 30 to 35 °C. Surprising  a cold period in early june, from 13 to 15 °C followed by strong rain falls and winds. In June alternation of cool and  hot temperatures because of irregular rainfall.

Summer was rather humid with for instance 25 mm on Châteauneuf du Pape on July 13th, 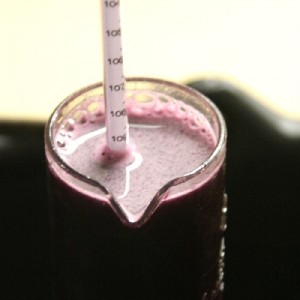 rains,were happily drained by the Mistral the following day. This month was intersected by tempered periods (wind from west and sun) and cooler (hail on Orange and Courthézon on July 26th). Big rainfall took place between August 6th and 7th then August 26th (100mm) before leaving a hot and scorching sun of 19 in 24 between 36 ° and 40 °C  with however necessary, cool nights, up to the period of grape harvests: phenolic maturation was not precocious on all terroir.Big yielding postponed the maturation : a year where the winemaker had to show adaptation skills

Séverine Lemoine from Domaine de la Rocalière on Tavel et Lirac  appellation is very satisfied : larger crop than previous years du millésime for Grenache noir ( that demanded more work and attention : " I had to be patient and to deserve it"). In spite of bigget crop, due to good fecondation during the blossoming, this grape hadn’t shot berries. this features preserved acidity. Strangely sugars had tendency to be ripe before skins. Mistral (the wind) and draining ground preserved grapes from rot. " this vintage will give a large scale of products, where the date and the mode of harvesting (hand harvesting, sorting) will have all their importance!" 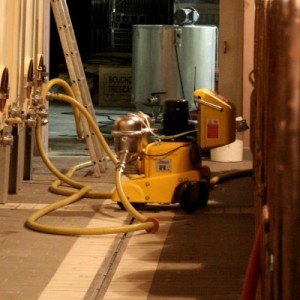 At Gigondas at Domaine des Bosquets managed by Julien Bréchet, confirms the late maturity of skins and sugars, resulting dgood acidities. Big job to do in the vines : thining all the leaves was necessary, green harvesting, sorting up to 15% of the crop. But we had a perfect quality with high degrees. On the same terroir, Jérôme Maillot, vineyard manager at Longue-Toque establishes the same comment :   high quality with a big diversity of maturity according to the terroir : "it’s going to be a vintage of winemaker".

At Châteauneuf du Pape, wimakers are rather satisfied, like Christian Voeux who manage Château la Nerthe : " because of the nice weather of the septembre, sanitary condition was perfect. Grenache, had no shot berries, quite productive young vines, nedded green harvesting" Still at Châteauneuf du Pape, Stephan Brun from Domaine Juliette Avril said there’s a great variation in maturity between north and south of the appellation : harvest laster for 3 weeks (10 days only in 2010). Julien Barrot from Domaine de la Barroche tells us, in spite of the exceptionnel indian summer, the harvest period was quite spread in time hence a fresh and fruity style for grapes harvested early ; more concentration and density for wines resuslting of the second period.

At the northern tip of southern Côtes du Rhône, Elizabeth et Marie Laurence Saladin, from domaine Saladin said it was a year of adaptation : terroirs with round pebbles resisted better, green harvesting were necessary on Grenaches et Mourvèdres on clayous ground to regulate volumes. Marie Laurence said : "maturity were strange and we had to work more carefully on blendings :  secondairy grapes benefited of the sunny late septembre.  Syrahs and Clairettes pink  where harvested few days before usual, perfect Carignan and Mourvèdres nedded time to ripe, Grenaches required more attention, white are outsanding."

Same statement : early spirng, cool summer, hot and sunny harvests. At Aniane, the had 44mm  rain in July (average in July : 13 mm), T° din August was 10°C (average T° nights and days). This balance sheet is to modify according to the nearness of the sea or the altitude. Volumes are the most important since 2004 with a high qualitative aspect. 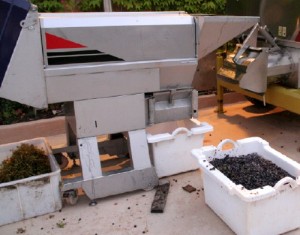 At Daumas-Gassac   in Terrasses du Larzac area, Samuel Guibert,  harvest for red went from 13 to 24 septembre, said that slow maturation due to the mild temperatures and cool nights are giving acidity and subtil aromas.

North to Béziers, in Faugères appellation,  Domaine Ollier-Taillefer is satisfied with this cool vintage with a sunny septembre  :  Grenaches  gave normal yields (bigger than usual) 38hl/ha versus 29 hl/ha  previous years : more fruity and crunchy. Globaly other grape are superb ; we had to wait for the phenollic maturation hence high alcool level but acidity is preserved !

The same sound at the of the Rhône river. In Provence, they underline the variation of T ° day and night which favour the synthesis of phenols: this vintage would be better for reds, they bless the Mistral which avoids the phytosanitary treatments: conclusion comes down in a normal maturity of sugars with a ripper conditions of the skins.

Neil Joyce, winemaker at Château Dalmeran in the appellation Baux de Provence, said 2011 is close to the  2007 style ! no shot berries on Grenache  and all the grapes had and harmonious maturity  : "with this vintage we have  colour, finesse of tannins et acidity".  It is necessary to say that this north orientated appellation is particularly subject to the  Rhodannien wind.

At the foohill of Sainte Victoire mountain, Mis Guichot manager of Domaine de Saint Ser, is very happy with this vintage. Grenaches were healthy, as other grape varieties. It is owed to the specific terroir in altitude  swept by the Mistral. She adds that rosés and whites have are more fruity, reds enoughpower, probably a little less acidity than 2010.

At Bandol appellation, we are globaly positive at the domaine Souviou. Even if Grenache are little not as nice, vintage gave superb crop, with quite high alcoholic degrees. Reds are powerful with enough – white and rosé are on the fruit, power and freshness. 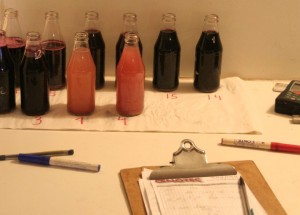 2011 is a vintage of winemaker and terroir ! Grenache, proned to suffer shot berry (coulure in french), formed big bunches, full and very juicy (the coulure regulates this vigorous grape variety of course) giving a yielding of 20 % more than 2010, which under the effect humid and cool summer could lead of the brotrytis on the more humid  and cooler lands. Grape harvests in green,thinning and sorting grape during harvests were necessary according to appellations. That leads to late maturity  on Grenache, to less intnese colours. In the Rhône Valley, good terroirs show a best result, of course! In that case, the style of that vintage would get closer to the concentration of the 2007 or 2009.