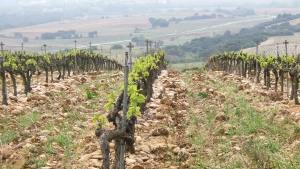 Châteauneuf-du-Pape became officially an appellation in 1936. The vineyard covers a surface of 3 140 ha, on five towns or villages : Châteauneuf du Pape, Courthézon, Orange, Bédarrides and Sorgues. The production is essentially concerned in reds, less tha 10% as white, no rosé.

The traditional wine training is « gobelet » pruning : a short pruning keeping 2 spurs. « Guyot » pruning is applied to Syrah to maintain the fragile branches upright and in order to improve ventilation. concerned Maximum yielding : 35 hl/ha.The content of alcohol must at least of 12°5.

Reds : Handpicking harvest with sorting out of the bad bunch of grape in the vineyard is mandatory. Light crush in order to respect the crop. Fermentations lasting 2 to 3 week in inert vats (concrete, stainless steel) Wine is pumped over frequently, mastering temperatures. Systematic malo-lactic fermentations. Wine are matured in foudres (re-used big oak vats) or new or re-used barrels. Wine is embottled the second year after harvest, or later in order to mature at the cellar.

Two new trends in wine making : Desteming tends to develop in the recent generation of winemaker to get rid of the stalks. Punching the cap (during the fermentation) grows kickly to get more colour and stuff in wines. 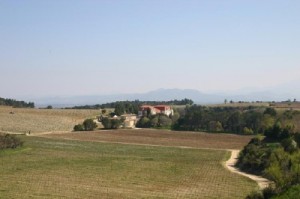 -Alluvial rocky terrasses with boulders, more or less shallow. Undergroung made of sandy-clayous heath, rusty grit, sand, and the mixture of the 3 kinds on slopes covrerd with boulders. `

-20% of the surface is covered with white limestone slabs.

The strong Mistral (from the north, cold and dry) is dominating, bring sun (2800 hours / year), the dryest part of the southern Rhône valley. Stone are giving back during the night, the accumulated temperature in the day, enabling a perfect maturation of phenols.