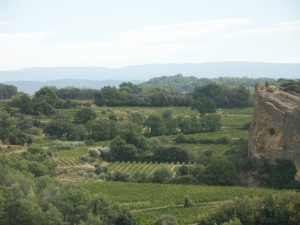 Beaumes-de-Venise vine area is located on the southern and eastern part of the Dentelles de Montmirail massif. AOC ‘s surface is 600 hectares (1500 acres) on the communes of Beaumes-de-Venise, Lafare, La Roque, Alric and Suzette. Altitudes are spreading from 100 m to 500 m.

The groung is made of 3 kinds of soils : marl, sand and limestone.

Unic in the Rhône Valley, sandy sediments from the Massif Central settled first, then limestone and marl in a tropical sea, and finally under the influence of the scorching climate, salt, gypsum and rusty red clays mixed together. That triad, named locally « trias », was covered with other thousand meters of sediment through the age.

Variations of geological conditions generate numerous micro-climatic opportunities which enable the realisation of various type of wine and set perfectly for great range of grape varieties.

In 2005, reds from Beaumes-de-Venise become a « cru », top level in Rhodanian hierarchy

(the same as Gidondas, Tavel or Châteauneuf du Pape).

To be granted Beaumes de Venise AOC (550 ha or 1375 acres), grapes must come from the best vineyards from slopes and terrasses, they may be situated in different kind of grounds or terroirs. The crop must be harvested by hand only. Chemical weedkillers, fertilizers and anti-fungus are forbidden.

Small and controlled yield at 38 hl/Ha.

Only traditional vinifications are authorized.

Terroir of CRU  Beaumes de Venise red : Wines must be issued from 3 major types of grounds :