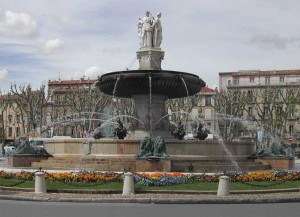 This vast area stretches from the Sainte Victoire Mountain (east) to the small Alpilles range (west), and encompasses the territory going from the bank of the Durance river (north), to Berre pond (south). The scenery concist in an alternation of parallel limestone height to the shore. 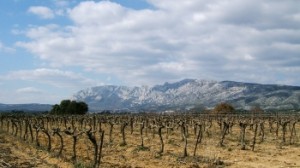 Most of grounds are chalky-clayous with sometimes important variations

Medtierranean marked by the dominant Mistral, coming from north, dry and cold. There’s more or less 2900 hours of sun during the vegetation period. Low rainfall : from 550 to 680 mm per year, raining essentially in spring and autumn. Violent in summer and autumn rainstorms may bring about devastation and erosion.

The littoral area takes advantage of the more humid influence coming from the sea. The western part undergo the Mistral characteristic condition, colder temperature from the Aples are to be seen on the north-eastern region, giving a sought after « fresness » for whites.

Grounds : its a small valley, north orientated, protected from winds by the Sainte Victoire mountain, with limestone and deep soils, giving finess to the wines.

Reds are powerful, tannic made to keep, rosé are fresh and aromatic, whites has got plenty of minerality and finess, structure and flavours (almond and limetree blossom).

For red and rosés : le Mourvèdre, Grenache noir and Cinsault must enter in the blending to at least 50%, 10 other varieties are authorized in which Tibouren

For whites : 80% (at least) of Clairette blanche with 10 other varieties.