This is a complex region for its dimension 150 km long x 50 km large (90x30 miles). A multitude of growing conditions can be observed due to the altitude, the proximity of the sea or of the mountains, the nature of groung and wind influences. 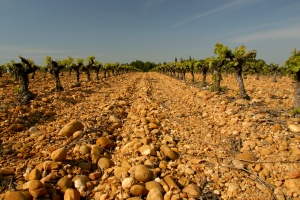 A great deal of variation can be seen : hard limestone slabs in the « Garrigues », schist by the mountain, gravels named locally « villafranchien » and sandstone. They are classified as :

One of the dryest region in France, the humid period are essentially divided in spring (for two months : 1/3 of the rain amount) and automn (two to three weeks : ½ of the rain amount). Violent rain storms happens in summer time (one to six hours), in automn (one to two weeks), rarely in spring.

Wind is playing, in Languedoc, a very important role. Tramontane in the western part, blowing two days out of three, drying vines, participates to fight against vine diseases. In the northern-western part by Carcassonne, ocean humid influence reduces the tough, dry and hot excess of the mediterranean climate.

By the Rhône Valley, on the estern part of Languedoc, the strong Mistral is blowing all year long, particularly close to Nîmes.

The best Languedoc wines are coming from Coteaux (slopes) vineyard. There, no frost, no mist and more sun. Ground tend to be best drained, producing generally poor, giving a more concentrated and smaller crop.

North orientation is not always the worst exposure.

Forests tend to balance vines from scorching conditions and protect them against wind intake.

Sea promimity attenuate heat excess in summer, warm them up in winter, leading to an favourable precocity in spring. 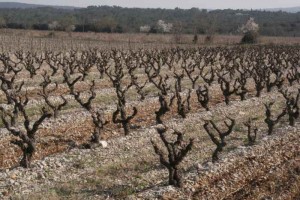 For whites : Grenache white, Clairette white and pink, Bourboulenc, Piquepoul white, Roussanne, Marsanne and Rolle (or Vermentino) must represent 70% the blending at leat. Viognier can be added : 10% max.

There’s an exception for the appellation Picpoul de Pinet AOC, winemakers must use 100 % of Piquepoul white.

Progressively, the wine administration is laying out a new organisation, in the principle of the Burgundian’s.

AOC Languedoc-Grés de Montpellier since 11th march 2003 on 46 villages around Montpellier in the Garrigue area.

Red wine production only, vine must be 9 years old for Carignan, 6 years for the other.

Short pruning at two spurs for each branch or in cordon pruning.

Mountains protect from the northern cold influences. Dry and hot in summer, with humid inflence from the sea, that favour precocity and maturity.

Grape varieties : the most important are Grenache noir at 20% least, Mourvèdre, Syrah : that 3 varieties must show 70% of the blending. Other authorised grape : Carignan. Grès de Montpellier wines must result of a blending of 2 varieties at least. 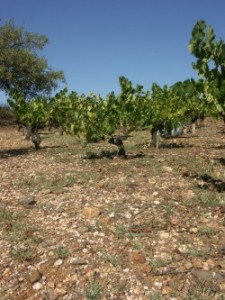 Pézenas terroir is territory of 15 km square of 15 communes (Adissan, Aspiran, Caux, Fontès, Fouzilhon, Gabian, Lieuran-Cabrières, Montesquieu, Neffiès, Nizas, Paulhan, Péret, Pézenas, Roujan, Vailhan) between the mountain and the plain by the shore. Its altitude ranges from 50 to 300 m.

Grape varieties : the most important are Grenache noir at least, Mourvèdre, Syrah : each variety must show 75% of the blending. Other : Cinsault and Carignan.

Grape must be harvested at 12,5% alchol potentatial.

Red wine production only, vines must be 7 years old.

Short pruning at 10 spurs maximum for each stump.

The sea breeze is playing a very important role in the life cycle and ripeness.

Vines are surrounded with garrigues and forest of pine trees, in a very wild setting.

For reds : the main grapes are Grenache noir (20% at least), Mourvèdre, Syrah ; that 3 varieties must represent 70% of the blending, these wines must result of a blending of 2 varieties at least. Other : Carignan and Cinsault.

For rosés : Grenache noir (20% at least), Carignan, must result of a blending of 2 varieties ; that 2 varieties must represent 70% of the blending. The vinification process results as bleeding of vat.

Languedoc-Clape appellation is famous for its whites. 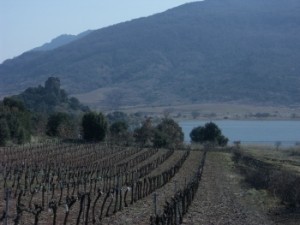 AOC Languedoc-Terrasses du Larzac spreads on the northern part of the Hérault department and is adjacent to the edge of the Massif Central mountain as a plateau (Causse du Larzac) geology. Altitudes vary from 100 m to 800 m, with an average around 250m high.

This appellation is producing reds only.

Vines must be 5 years old.

Short pruning is mandatory with 10 spurs per stump.

The same mediterranean climate, without sea breeze, rainfall happens essentially in autumn and spring. A more important thermic variation, with quite cool nights (the fresh temperature come down from the mountain) and very hot days, favours a slow and gradual maturations, benefic to improve colour and tastes. 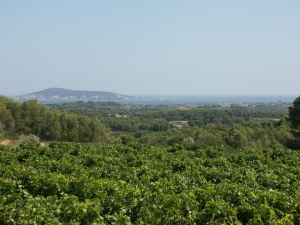 Terrasses de Béziers terroir is made of rounding slopes and undulating plain. Arid climate. The ground is principally composed of layers of boulders (sediment desposit named villafranchien) sandy marls and limestone. These deep conditions enable the root to bore the ground to find moisture. The sea breeze balances the excess of heat during the summer.

For reds : mainly Syrah blended with the other traditional mediterranean grapes as Grenache, Mourvèdre, Carignan and Cinsault.